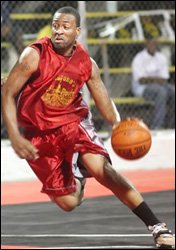 The S.L. Horsfords Ghetto Roots blazed into the playoffs with an 82-76 defeat of the LIME Fig Tree Dirt Revelers on Tuesday at Basketball City.

Indeed, the Ghetto Roots were red hot, sinking threes after threes in the opening minutes of play.

However, the Ghetto Roots seemingly became complacent and allowed Fig Tree to get back into the game in the second quarter of play.

The players of the Ghetto Roots team were apparently brimming with confidence, and while boasting their prowess, Fig Tree was able to take control of the game.

Ghetto Roots, however, weathered the storm and came roaring back in the second half, led by national guard and arguably the best player in the SKABA  Levi “By-By” Fyfeild along with equally talented Rymal “Bally” Browne.

Fyfield had a total of 27 points in the game, two of which came from a sensational dunk that energised the Ghetto Roots team.

Browne was solid in controlling the ball, and had a total of 24 points in the game.

Also, Ghetto Roots got a tremendous game from their power forward Troy “Jasbo” Wattley, who was an unstoppable force under the rims.

Fig Tree had no answer to solve the type of defensive problems that Wattley was causing in the key.

Most basketball pundits in the Federation will argue that the Ghetto Roots is one most the talented team in the league.

Other than the Rams Hitters, Ghetto Roots has no equal in the Premier Division.

“I think Ghetto Roots and Hitters are in a league by themselves,” WallisWilkin, manager of the Ghetto Roots team, said.

Wilkin said this is indeed the year for Ghetto Roots to walk away with the championship title, particularly since this year the Rams Hitters are not as dominant as they were last year.

“On paper Ghetto Roots has more talented players than Hitters,” Wilkin said. “When you match up these players, our players are better.

Ghetto Roots ended the season just behind Hitters whom they defeated in a thrilling victory during the leagues 2nd round of matches. Hitters boasted some 3 overseas based players but were still humbled by the exceptional play of local based Levi “By-By” Fyfeild and Rymal “Bally” Browne.