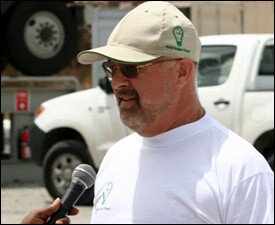 In a joint press briefing held Monday, November 03, with Director and Manager of the Nevis Disaster Management Office Mr. Lester Blackett, Mcdonald cleared the air when he made the following statement and assured the people of Nevis that drilling activities were not linked to the earthquakes, another respected analysis by the regions research institution studying volcanic and earthquake activity at Arc-level.

“The drilling WIP has been doing on the West side of the Island had nothing to do with the earthquake that occurred. First of all, let me say that there was no correlation between the two activities.

“In fact, we were not drilling for over one week on the west side of the Island. As you know, this earthquake was 11 miles off of the eastern side of the island close to the Tectonic Plate, where all the seismic activity has been and that’s pretty much the same region that all seismic activity that has affected Nevis has been located and that included the 1952 earthquake. This earthquake was at 22 miles depth and this was where the earthquake came from. The deepest well that we [WIP] have drilled is 3,720 feet,” Mr. McDonald said.

In April of 2008, the SRU at the UWI jointly secured a five-year contract with the Institute de Physique du Globe de Parris (IPGP), to manage the Montserrat Volcano Observatory (MVO), bringing the Caribbean’s only erupting volcano back under the watch of regional Scientists. In 1995, the SRU at the UWI was significantly involved in managing the MVO during the first few years of eruption.