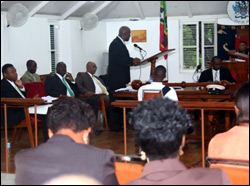 History making legislation with regard to geothermal resources, the first of its kind in the English speaking Caribbean, was passed in the Nevis Island Assembly in Charlestown, shortly before 7pm on July 08, 2008.

The legislation entitled the Nevis Geothermal Resources Development Ordinance, 2008 was tabled by Jr. Minister with responsibility for Natural Resources Hon Carlisle Powell and would provide for the reconnaissance, exploration, drilling, production and use of geothermal resources; for vesting all such resources in the Crown and to provide for related incidental matters.

While he introduced the Bill, Mr. Powell addressed the matter in context of the history of the science of geothermal, the rising cost of fuel prices and the energy and economic independence that the geothermal resource could offer the people of Nevis.

He also referred to the Bill as non controversial, among the most important pieces of legislation ever to be debated in Nevis’ Parliament and which represented the hard work and vision of a team of people who were dedicated to making life better for all Nevisians.

“This landmark legislation represents the hard work and vision of a team of people (Nevis reformation Party ““led Administration) who are dedicated to making life better for all Nevisians as we seek to reduce the cost of living for all of our people :Nationals and residents, private and business, NRP (supporters) and CCM (Concerned Citizens Movement supporters). This is one of the best gifts that we can give to our people on the eve of the second anniversary of our election to office,” he said.

Mr. Powell made the point that all fees under the Ordinance were payable to the Nevis Island Administration (NIA) through the Treasury in Charlestown.

He said geothermal energy represented the most important find in the history of Nevis and was equivalent to Trinidad’s oil or South Africa’s diamonds and gold or the natural gas of Russia. It was therefore incomprehensible, how any person with the best interest of Nevis at heart, could have worked so hard to legislate the economic future of the island into the hands of the Federal government.

The Minister at the time referred to a Geothermal Resource Development Bill by the CCM- led Administration in 2004, put together by a six member team led by Mr. A. John Armstrong, of which now Opposition Senator Hon. Mark Brantley was the only representative from Nevis.

The previous Bill made no provisions for any geothermal resources discovered on the island to be managed by the people of Nevis but instead provided for National Renewable Resources Policy Council which would be run by the Federal government.

Other persons who would include non-governmental consultants as the Minister may from time to time designate, shall be invited to attend meetings pertaining to their responsibility.

Mr. Powell publicly thanked his Permanent Secretary Mr. Ernie Stapleton who he said was the glue which held it all together and had worked tirelessly to coordinate the entire project.

He also pointed to the hard work of the local team which comprised of the Legal Department headed by Legal Advisor Mr. Patrice Nisbett, the Ministry of Finance headed by Permanent Secretary Mr. Laurie Lawrence and the Nevis Electricity Company Ltd. headed by General Manager Mr. Cartwright Farrell.

The Minister informed the Assembly that the NIA had worked closely with a team from the Organization of American States (OAS) Head of the Renewable Energy section Mr. Mark Lambrides, Mr. Kelvin De Cuba and Mr. A. John Armstrong from the United Nations Industrial Development Organization (UNIDO) who had provided several hours of individual support at no cost to the government and people of Nevis to put the draft ordinance together.