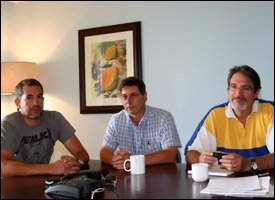 The interview phase for applicants selected from over 600 applicants for work with Ocean View Construction earlier this week is expected to commence on Monday June 22.

Project Manager of the Construction Company Mr. Jesus Hinojosa told the Department of Information on Wednesday that the process of sorting through the applications from a two-day job fair which concluded on Tuesday had commenced.

“We want to review all the applications from now to the end of the week. By Monday we will start a process of interviewing some of the persons that will have a job right away,” he said.

The Mexico based Company was subcontracted by Pittsburgh based DCK International to commence restoration work at the Four Seasons Resort on Nevis. The hotel was the island’s single largest employer, prior to its closure earlier this year, due to damage sustained during the passage of Hurricane Omar in 2008.

Mr. Hinojosa also advised applicants to be patient since jobs would not be immediately available to all the successful applicants.

“We just want everybody who went to the job fair to be patient because we don’t have a job right away for everyone but if they wait a little bit and as we progress in the project we will be calling more and more and different trades,” he said.

Mr. Hinojosa noted that construction work was expected to commence on the six to seven month project on June 29 but safety training was an important component which had to be completed ahead of works.

“We are going to start interviewing the guys on the 22nd and once we start hiring them they are going to be needed to start doing the safety training which is going to take two or three days for each individual and it takes time.

“So we are thinking that by the 29th, we are going to be scheduling work but from the 23 to the 29th it’s going to be basically safety training for the workers,” he explained.

Meantime, Operations Officer DCK International Mr. John Gallo disclosed that there local subcontractors were expected to be employed along with Ocean View Construction during the project but that stage had not yet commenced.

He also commented on the matters of safety for employees on the project.

“They will be brought here and trained here in our conference room we have all the video and stuff they will be seeing on safety and our safety programme. We have to get them up to speed on exactly what they have to do with our safety programme in conjunction with the form that they signed at the job fair,” he said.

Project Manager of DCK International Mr. Enrique Salinas said all the work that had so far been done with regard to the recruitment of local workers was all within the island’s regulations

He noted that his company had been working in close collaboration with the Department of Labour which had given them invaluable assistance.

Mr. Salinas also said that the information collected during the job fair provided a data base for other sub contractors from other disciplines. He said it would streamline the process as the project moved forward.

He said the move meant that the new sub contractors local or foreign would not have to go through the process again and as such the process of recruitment would be considerably expedited.