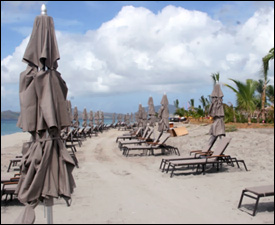 President of Four Seasons Worldwide Operations Mr. Jim Fitz-Gibbon, described the upcoming December 15th reopening of the Four Seasons Resort, Nevis, as a whole new life for the next generation as he thanked the Nevis Island Administration (NIA) for its unwavering support and the pivotal role it played in the facility’s reopening.

His comment came in an interview with the Department of Information on Saturday, at the conclusion of a two day visit to the island. The resort will reopen after a two-year closure, with a compliment of over 600 workers.

“It has been a very difficult two years we have been hit by hurricane we had some financial issues and without the support of Premier Parry and his government, this would not have opened. There is a special reason we have come down to say thank you for this,” he said.

According to Mr. Fitz-Gibbon, excitement among the staff continued to build ahead of Wednesday’s opening and would continue to build in the future.

“I think this is a whole new lease on life on this resort and everybody is so enthused and you see those smiling fresh faces, I am ready to look after the guests and you see the sign saying Ã¢â‚¬ËœWe were number one and we are going to be number one again’ and that’s what you want to hear,” he said.

In response to the US$40million investments that had been invested in refurbishment of the resort, the Four Seasons Operations Worldwide President noted the facility’s continued growth and investor confidence was evident in the Nevis Resort.

“This was confidence in you as a people, the government, the destination all the whole package so we are thrilled,” he said.

With regard to the resort as a destination the top Four Seasons official said its reputation had everything to do with the people of Nevis.

Mr. Fitz-Gibbon referred to the renovated hotel as a world class facility that would soon regain its former top position in the market.

“It’s going to compete on the world stage and that’s the stage we compete on all the time. This resort will fit right in there and we are very confident going forward”¦We are going to get back there it’s all in the mmind. Just have to go for it,” he said.

During his visit to Nevis, Mr. Fitz-Gibbon led the Nevis Island Administration Cabinet headed by Premier and Minister of Tourism on Nevis Hon. Joseph Parry on a tour of the Resort on Thursday. On Friday he took part in a Pep Rally themed “Simply the Best” for the workers and later that day in an awards celebration for workers who had served the Resort for 20 years.