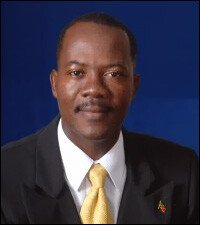 A former candidate for the opposition People’s Action Movement (PAM) is accusing the party’s leader, lawyer Lindsay Fitz Patrick Grant of what he says is a “willful, vicious and calculated attack” against him.

Mr. Glenroy Blanchette in a statement circulated to the media late Thursday, states that the PAM leadership has been ignoring an election petition matter in the High Court by refusing to send its lawyers to hearings set by the High Court Judge, His Lordship Mr. Justice Errol Thomas.

“I want to make it absolutely clear that I did not ask the PAM to challenge the results of the 2004 General Elections in Court.  It was the PAM that made the decision to file the petition with the full knowledge and understanding that the Party would cover the costs.  I believe that this has been a longstanding tradition of the Party,” said Mr. Blanchette.

He stated that in November of 2004, the People’s Action Movement (PAM) filed three election petitions challenging the results of the 25th October 2004 General Elections in Constituencies 1, 4 and 8. The PAM was unsuccessful in its attempt to get the Court to declare the election results null and void.

He said that the Court also instructed both parties to file written submissions regarding costs and attend Court hearings to discuss the matter.

“One such hearing was held on 10th December 2010.  There was no appearance by the lawyers who were assigned to the case by the Party.  In fact, Ms. Constance Mitcham told the Court that she had received no instructions from the Party regarding the matter. Additionally, the Court had instructed that the Petitioner file and serve an affidavit in response on or before 28th February 2011.  Again, no response was filed by the lawyers who were dealing with the case,” Mr. Blanchette said.

He disclosed that the Court met again on Friday 8th April and Tuesday 12th April and the matter was heard by Justice Errol Thomas.

“Again, no lawyers showed up to represent me on behalf of the PAM,” said Mr. Blanchette.

He said that he wrote a letter dated 12th January 2011 to past Chairman of PAM, Mr. Sydney Osborne informing him of the Court Hearing and his desire to be properly represented and indemnified with this matter.

He said that on the morning of the 8th April Court hearing, he gave a copy of the correspondence to lawyer McClure Taylor and he has not heard from him.

“I want to make it absolutely clear that I did not ask the PAM to challenge the results of the 2004 General Elections in Court.  It was the PAM that made the decision to file the petition with the full knowledge and understanding that the Party would cover the costs.  I believe that this has been a longstanding tradition of the Party. Therefore, I went along with the request of the Party Leader to contest the election results and trusted him with ensuring that I would be properly and completely indemnified of all associated costs,” said the statement issued by Mr. Blanchette.

“As a matter of fact, the Party received a hefty donation of US$250,000.000 to cover the costs of the petitions.  I cannot tell you how that money was spent,” said Mr. Blanchette.

“I now view Mr. Lindsay Grant’s refusal to show any interest whatsoever in this Court matter as a willful, vicious and calculated attack against me in his attempt to get back against me. In his usual selfish and vindictive style, he has sought to fulfill his mission not recognizing that in doing so he is also destroying the People’s Action Movement,” said Mr. Blanchette, adding:

“It is public knowledge that I and four other former candidates of the People’s Action Movement, namely Roy Fleming, Bernard Welsh, Junie Hodge and Ronald Williams had asked Mr. Grant to step down as Political Leader of PAM. following the 25th January 2010 General Elections because of his involvement in the Marriott Bribery Scandal and his poor leadership leading up to the polls.”

He said Mr. Grant did not take kindly to their request and he responded immediately in a way that was true to his character.


“I was told by one of my colleagues that Mr. Grant said that he would ensure that I and my colleagues are unable to live in St. Kitts,” said Mr. Blanchette.

He said he was subsequently fired by the Democrat Newspaper which is owned by PAM.

“Almost a year has gone and the Democrat has refused to pay me my Holiday Pay and Payment in Lieu of Notice as mandated by the 1986 Protection of Employment Act. My lawyer wrote to the Democrat and up to this moment he has not received a response,” said Mr. Blanchette.

“Attempts are being made by some in the Party to destroy my good name by spreading lies, innuendos and half-truths about me.  They do this as a strategy to turn people against me.  They will not succeed.  Truth will never be suppressed. I wish to tell Mr. Grant that I, Glenroy Mervin Blanchette, born and raised in Newtown, will not be intimidated by him and will not leave St. Kitts because of him.  I urge Mr. Grant to let common sense prevail and do what is right and just in the sight of God,” Mr. Blanchette’s statement said.