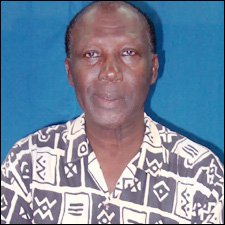 The Returning Nationals Association has answered the call of the Ministry of National Security for the community to play a larger role in the fight against crime.

“We have [recognized] “¦ that the Minister is fully committed to trying to solve the problems,” the association’s President George Richards stressed on this week’s edition of SKNIS Perspectives. “He cannot do it on his own, we are well aware of that. Some people tend to think that the Government alone can do everything but crime is such a multifaceted [issue] that it takes more than the Government.”

This was the main motivation behind the presentation of a cheque valued at $1,000.00 to the Minister responsible for security Honourable Sam Condor. Mr. Richards praised Deputy Prime Minister Condor, who attended the meeting after hearing an advertisement on the radio.

“He contacted us with a view to coming to talk to us “¦ and we welcomed him quite heartily. We were very pleased that he came,” Mr. Richards emphasized, adding that the exchange of ideas that ensued was quite productive.

President Richards explained that returning nationals possess a wealth of knowledge gained while living abroad and some members have been working individually on select community projects.

The Association signaled its intent to increase these efforts and form collaborations with ongoing initiatives such as the Police Force’s “Operation Future” programme which visits schools on St. Kitts and Nevis to encourage positive behaviour.

The returning national emphasized that the countries around the world are facing an upsurge of antisocial activities committed by young people and he stressed that citizens of St. Kitts and Nevis must come together and do as much as possible to aid the youth population.