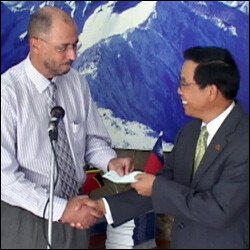 The traditions of the indigenous folklore groups will once again be on display this carnival season, thanks to the support of community-minded companies and partners of the Ministry of Culture.

The St. Kitts-based Embassy of the Republic of China (Taiwan) has actively reaffirmed its support to activities of the twin-island Federation by presenting a cheque to benefit folklore groups such as the masquerade, clown, bull and moko-jumbies for the upcoming festivities.

The monies will be used to “make sure that the folklore [acts] have the best possible costuming and music and generally get ready for performing their traditional cultural roles in our festival,” Minister of State responsible for culture, Honourable Richard Skerritt said, before accepting the “generous donation” from His Excellency Rong Chuan Wu.

“We don’t fund everything for all the groups. We fill gaps where they are needed most,” he added, noting that new groups in particular, will welcome assistance.

The support of the Taiwanese Embassy means a lot to the Government and the Carnival Committee. Minister Skerritt explained that the global economic and financial crisis has resulted in reduced support from the private sector.

However, the Christophe Harbour Development Company, N. Brisbane and Associates, and Kelsick, Wilkin and Ferdinand have all come forward to make donations specifically to support the folklore traditions. Portions of the proceeds will also go towards the outfitting the Carnival Grand Marshall. The Ministry of Culture is trying to raise approximately $20,000.00 for the cause and is reportedly more than halfway there thanks to the contributions of partners such as the Taiwanese.

“Our Embassy has spared no efforts in promoting cultural exchanges between our two countries, because I am convinced that culture is an extremely important factor in “¦ relations between our two people,” Ambassador Wu declared. “We appreciate very much the efforts of the Ministry of Culture to further develop indigenous culture, especially folklore. So once again, I am pleased to represent my Government [in giving] this humble and small contribution. I wish this year’s carnival would be another great success.”

Fifteen folklore groups are registered to participate in the St. Kitts and Nevis National Carnival 2009/2010. They will be primarily showcased during the December 29 and 30 Folklore Avenue Extravaganza on Fort Street. Groups will also perform in various communities throughout the season and will remain a highlight of the Grand Parade on New Year’s Day, and Last Lap on January 2. The Folklore Academy of St. Kitts and Nevis, which features children between the ages of 5-12, will be among the new acts performing this year.