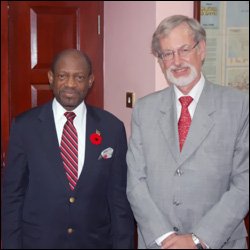 Initiatives to be undertaken by the Government of Finland with Caribbean countries in the area of energy, meteorology and ocean management, were discussed in Basseterre, the St. Kitts capital on Monday afternoon.

The visit to St. Kitts comes less than two months after establishing diplomatic relations during the 64th General Assembly of the United Nations in New York.

Permanent Secretary in the Ministry of Foreign Affairs, Mrs. Astona Browne, said that interaction with high level officials of Finland has been steadily increasing.

“In April of this year, I held a meeting with Ambassador Kimmo Pulkkinen to discuss matters of mutual interest. That visit was followed by High Level meetings between Prime Minister Douglas and the Foreign Minister of Finland, His Excellency Alexander Stubb in September this year,” said Mrs. Browne.

Finland has expressed an interest in having an Honorary Consulate of Finland in St. Kitts and Nevis.

The Ministry said St. Kitts and Nevis looks forward to the strengthening of relations between the Federation and Finland that will redound to the benefit of both peoples.