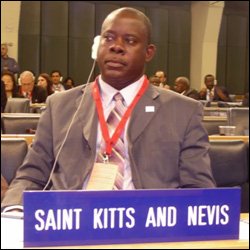 Minister of Agriculture in the Nevis Island Administration Hon. Robelto Hector said it was important for small island developing states like St. Kitts and Nevis to participate in conferences which dealt with issues related to world hunger.

The Minister made the comment on the heels of his return to the Federation on Monday from Rome where he led the Federal delegation at the United Nations Food and Agriculture Organization’s (FAO’s) world summit on food security. The event took place from November 16-18th.

“We are an import dependant state and with this global food shortage we can well end up paying much more for food.

“So we have to adopt the strategies and policies which would mitigate some of the fall out of such global challenges,” he said.

Mr. Hector also noted that during his presentation at the conference, which was attended by over 100 countries, he impressed on the need for the Caribbean’s continued assistance from international donor agencies.

“We in the Caribbean find it difficult to succeed without the help of international donor agencies like the FAO and other organisations, which act on the food security issues.

“We have a history of resilience and self reliance. The Caribbean community is committed to achieving food security through regional cooperation and international intervention,” he said.

With regard to St. Kitts and Nevis, Mr. Hector explained that the island’s food needs were accorded more priority than the equally important energy needs.

He said the focus on the production of energy from wind, geothermal and solar sources did not come from crops since the governments were fully aware that the consequences of their actions today, would impact on the future generations of an interconnected world.

Notwithstanding, Mr. Hector also acknowledged that research on resilient seeds for the dry season, soil conservation and health factors would help to develop a more prosperous future.

“With cooperation from everyone, especially large foundations and organisations and wealthy governments, the countries with food insecurity vulnerabilities will find relief sooner. Later might be too late,” he said.

Mr. Hector was accompanied at the Summit by Permanent secretary in the St. Kitts Ministry of Agriculture Dr. Hermia Anthony.