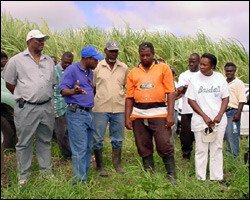 Farmers in St. Kitts – Nevis have been told that ways must be found to sustain the increasing vegetable yields with a combination of knowledge, technology and investment.

Minister of Agriculture, Hon. Cedric Liburd told the Annual Agricultural Review Meeting Wednesday that while major constraints to increased production were the reliance on rain fed production and damage by stray and roaming animals, especially monkeys, there must be further investment in food production if the twin island Federation is to meet domestic demand and seize the new opportunities to feed the local population and visitors.

He said that the monthly production data indicate that the growth figures in primary products have increased in five of the eleven major food crops, an indication that the Federation continues to consume more than it produces.

He said that the relocation of the thousands of animals from the Southeast Peninsular has been another challenge for the Ministry of Agriculture last year, but officials will be working with stakeholders to ensure that all the animals are relocated.

Mr. Liburd said that the Ministry is discussing with the relevant agencies the problem of stray animals and the high population of monkeys which continue to be a problem for local farmers.

“The access to more lands has to be supported with adequate and appropriate investment. Farmers must commit to growing their businesses through joint venture and other business arrangements,” said Minister Liburd.

He disclosed that government is reviewing all applications for the agricultural sector which includes food production, livestock and horticulture and successful applicants will be notified.

Minister Liburd disclosed that the Policy and Planning Unit has produced a revised incentive package for farmers and fishers which will be presented to the stakeholders for discussion and farmers and other agricultural producers who demonstrate a willingness to commercialise their agri-business will be granted priority access to these incentives.

He said that eligible farmers, who have benefited from the EX-SSMC Agricultural Training Scheme, can qualify for interest-free loans provided through the Development Bank by the Sugar Industry Diversification Foundation.

Government has taken a decision to build a packing house which will assist the farmers in the areas of maintaining standards, grading, packaging and pricing ““ which will benefit both the farmers and the consumers.

“It has already been budgeted for and I would expect the Department of Agriculture will now ensure that this will be implemented for 2009,” said Minister Liburd, who pointed out that the current financial crisis and also the international food crisis have challenge farmers to become more efficient in the business of agriculture and therefore it was mandatory that a strategy be developed to soften to impact that may be felt by local consumers.