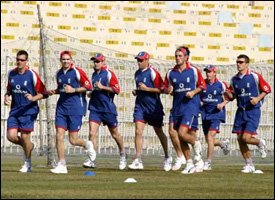 English Cricket Team Warm Up For The Windies

St. Kitts and Nevis Prime Minister and Minister of Sports, Hon. Dr. Denzil L. Douglas will join Minister of State in the Ministry of Sport, Sen. the Hon. Richard “Ricky” Skerritt in greeting the English national Team on Wednesday.

Dr. Douglas and Mr. Skerritt will join the St. Kitts Tourism Authority and the Local Organising Committee of England’s Cricket Tour of the Caribbean to welcome Captain Andrew Strauss and his team.

A turbulent relationship between Pietersen and coach Peter Moores came to a head when the former resigned and the latter was sacked.

Pietersen, whose reign as captain lasted just five months, has said he plans to return to England’s batting order as a regular member of the 11.

England play their first match in the Caribbean on 25th January when they take on a St. Kitts and Nevis Invitation XI, with the first Test following in Jamaica on 4 February.