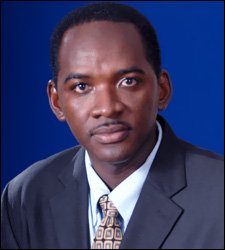 People’s Action Movement candidate Ronald “Louie” Williams has joined his party’s Leader Lindsay Grant in maintaining that under a PAM Government free education will be one of the key features of a new thrust in nation building and development. This was an initiative that  was introduced in the former PAM adminsitration as part of Sir Kennedy Simmonds’ pursuit to bring a cadre of intelligent and well-educated youngsters to lend to the development of St. Kitts and Nevis.

According to Williams, Sir Kennedy, in his quest, had insisted that no child in St. Kitts and Nevis should be deprived of developing his or her potential because of the lack of access to education due to poverty or any other challenges.

Moreover, he had established free education from kindergarten to college level, said Williams, who will assume the portfolio of Minister of Education and Information when the People’s Action Movement take office after the upcoming general elections.

“In order to support his decision and to cope with a chronic shortage of teachers, Sir Kennedy sought to expand teacher-training, which resulted in the construction of what is now known as the Clarence Fitzroy Bryant College (CFBC) in 1996,” said Williams.

“And even in the face of putting measures in place to address training, Sir Kennedy organized the establishment of a number of primary and high schools while ensuring that students who wanted monies to continue their tertiary education were able to acquire loans to pursue their studies,” the PAM Constituency Seven representative said.

He stressed that under the Simmonds administration of 1980-1995, education was seen as an avenue to offer students a range of skills in addition to the opportunity to develop academically to their fullest. “They got free books, recreation facilities, uniforms, tuition, among a number of other things,” the former teacher of 18 years reminded.

According to Williams who recently left the teaching profession after entering the political arena, Sir Kennedy was of the understanding that no nation could truly develop without committed, competent and caring young leaders. However, Williams who said that the foundation for his academic success was laid under the PAM administration, pointed to policies of the current Labour administration which have brought two tragic conditions into existence.

He outlined that few graduates were allowed to remain in St. Kitts and Nevis to serve, even though many of them wanted to stay.

Williams passionately argued that an unforgivable crime was committed against the youths of the country in the education sector.  He claimed that the handling of education by the current administration has resulted in a number of students being frustrated, as opportunities to further their studies are limited in many ways, adding that some persons are denied loans and scholarships because of their family political background and relationship. This, Williams said, has been a direct assault on the legacy that was left by the outgoing PAM administration.

He spoke to the values that teachers were able in those days to instill into young people, noting they were intended to give the young from every corner of the Federation an opportunity to live, learn, work and play together in a controlled and healthy environment, successfully breaking the old bonds of ignorance, suspicion and a disconnect.

“But this is post PAM era! For more work we are receiving less pay, and for inferior sugar we now pay more; believe it or not. Alas! Sir Kennedy was two steps ahead of us. The majority did not understand the need for sacrifice to attain the precious prize of a viable New Nation,” asserted Williams.