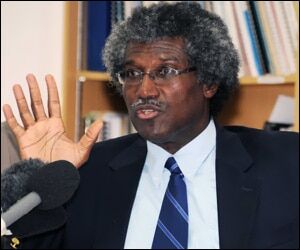 The Eastern Caribbean Central Bank (ECCB) Monetary Council met on Monday, December 28, at the Ocean Terrace Inn in St. Kitts to deal with issues of governance related to the vacancy left by Sir K. Dwight Venner who retired as Governor of the ECCB in November of this year after having served in that post for 26 years, making him the longest serving governor of any Central Bank.

The two top candidates for the post of Governor of the ECCB are Grenada’s Timothy Antoine and St. Lucia’s Dr. Hyginus Leon.

Dr. Leon received his PhD from the University of Southampton. His research interests are in applied econometric and finance. He has several published works, has served as Head of Research at the Central Bank of Barbados, served as an Associate Professor at the State University of New York, and is a senior official at the International Monetary Fund (IMF) for close to 20 years.

Timothy Antoine is an economist by training. He is presently the Permanent Secretary in the Ministry of Finance in Grenada.

A Search Committee to find a new governor for the ECCB (located in Basseterre, St. Kitts) commenced work on June 5 of this year. The search committee is headed by Sir Errol Allen, who is a native of St. Vincent and the Grenadines. He served as Deputy Governor of the ECCB from 1974-2005. Other members of the search committee are Mr. Ewart Williams, Former Governor of the Central Bank of Trinidad and Tobago; Mr. Fitzroy O’Neal, retired banker from Grenada; and Dr. Robertine Chaderton, accountant and retired University of the West Indies Lecturer in Accounting; she is from St. Kitts.