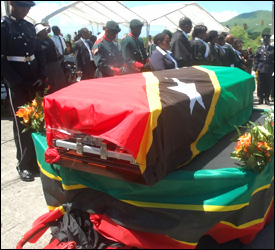 Contingents of the St. Kitts-Nevis Defence Force, the Royal St Christopher Nevis Police Force, the Cadet Corps and the St. Kitts and Nevis Fire Services paraded and paid their respect from the time of receiving the casket to internment.

The Colours of the St. Kitts-Nevis Defence Force and the Ensign of the Royal St. Christopher and Nevis Police Force were draped throughout the funeral.

Draped in the national flag, the wooden casket bearing the mortal remains of Dr. Daniel was placed on a gun carriage and escorted by a police motor-cycle outrider to the Charlestown Court House where sentries presented Arms and then rested on their arms reverse around the casket throughout the period of viewing by family members, the Premier, the Hon. Joseph Parry, members of the Nevis Island Administration, the Bar Association, the hundreds of Nevisians.

At the end of the viewing, the casket was placed on the gun carriage. Marching at slow time to the music of the SKNDF Drum Corps and Band, the procession proceed north along Government Road, west onto Prince Charles Street and north onto Hunkins Drive to Hamilton House.

Upon reaching the D R Walwyn Plaza on Main Street, the procession cadence to quick march reverting to slow-time 75 yards from the M.V. Christina Memorial on Hunkins Drive where the Nevis Symphonic Band render a musical tribute to the late Premier.

After falling out, the gun carriage escorted by the sentries, immediate family and dignitaries motored on the long drive to the St. Thomas’ Anglican Church.

The Old Testament was read by grandson, Mr. Jevorn Farrell and the New Testament by granddaughter Deonecia Daniel.

The eulogy was delivered by Mr. Victor Jay Martin and the Homily by Rev. Francis.

Following the removal of the National Flag from the casket, the flag was given to Commissioner of Police, Mr. C. G. Walwyn, who then gave it to the Premier of Nevis, the Hon. Joseph Parry for presentation to Mrs. Sheila Daniel.

In a salute to Mr. Daniel, the Firing Party was ordered to fire volleys with blank cartridges and the buglers sounded the “Last Post” as Officers and Warrant Officers gave a salute. The Buglers then sounded the “Reveille” and the Drum Corps and Band play the “Evening Hymn.”

The Honey Bees String Band played traditional graveside hymns before the laying of the wreaths.

Among the mourners were Governor General, His Excellency Dr. Sir Cuthbert Sebastian; Deputy Prime Minister the Hon. Sam Condor and Mrs. Condor, Ministers in the Federal Cabinet; The Speaker of the National Assembly, the Hon. Curtis Martin  and members of the Federal Assembly; Premier of Nevis, the Hon. Joseph Parry and Mrs. Parry and Members of the Nevis Island Administration  and their wives; High Court Judge His Lordship, Mr. Justice John Benjamin; Master Pearletta Lanns; Magistrate, Her Worship, Ms. Yasmin Clarke and representatives of the St. Kitts and Nevis Bar Association and uniformed bodies included the nurses.