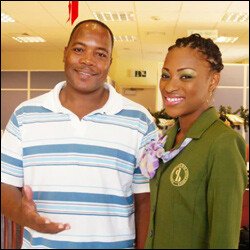 The Development Bank of Saint Kitts and Nevis has partnered with the St. Kitts and Nevis National Carnival Committee by agreeing to sponsor Nevis’ Masinda Nisbett, one of the six Carnival Queen Pageant contestants to the tune of $12,000. This popular pageant, which has a national following, will be held on Monday December 28.

According to the General Manager, Lenworth Harris, the bank has a long history of supporting the country’s culture and this sponsorship of the 38th anniversary of National Carnival goes a long to underscore the importance it attaches to cultural activities that take place in the Federation. Similar sponsorship was extended to the 35th anniversary of Nevis’ Culturama.

“As an institution that has physical presence on both the islands, we are proud to be sponsoring a contestant from the sister island of Nevis,” said the general manager. “The Federation has a rich cultural diversity and one of the ways to showcase this diversity is through this sponsorship of Masinda Nisbett’s participation in the 2009/2010 National Carnival.”

Masinda, who will take part in the pageant as Miss Development Bank of Saint Kitts and Nevis is not new to high-level pageants. She is the reigning Miss Culture Queen having won the title on August 2nd this year during Nevis Culturama’s 35th Anniversary.

“Our contestant is on the threshold of creating history,” pointed out Harris. “If she wins, and we are confident that she will take the crown, she will be the first person in the history of the Federation of St. Kitts and Nevis to have held pageant titles from the two islands at the same time.”