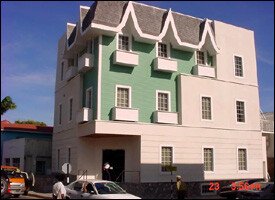 The Development Bank of St. Kitts and Nevis is reporting a record profit of EC$4.2 million in 2007. The Bank had projected a profit of EC$3.8 million.

According to the bank, 50 percent of its portfolio went to the agriculture, industry and commercial sector, 24 percent to student loans, 18 percent to mortgage and 8 percent to the personal development fund.

Chairman of the Board, Mr. Elvis Newton said the financial institution has been in the forefront of empowering through provision of student loans, mortgage packages and financing small as well as medium size businesses, those subgroups of the Federation’s population with limited access to financial services.

“Such empowerment opportunities in support of government’s thrust to promote holistic economic and social development has been achieved through a variety of invocative approaches, intended particularly in this era of transformation, following the country’s exit from sugar production, to create employment, promote diversification of agricultural and industrial activities and facilitate further development of small and medium size businesses,” said Mr. Newton.