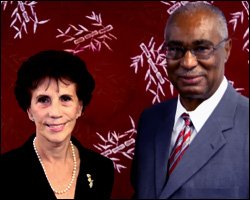 Premier of Nevis, the Hon. Joseph Parry bade farewell to the Ambassador of the Republic of Cuba to the Federation of St. Kitts and Nevis, Her Excellency Ana Maria Gonzalez Suarez.  Mr. Parry made brief remarks at a farewell ceremony held in her honour on Thursday, October 22, 2009, hosted by Prime Minister of St. Kitts- Nevis, the Hon. Dr. Denzil Douglas at the Frigate Bay Beach Resort in St. Kitts.

Premier Parry expressed the gratitude of his Government and people of Nevis for all the assistance given by the Ambassador in a bid to secure great relations between Cuba and St. Kitts-Nevis.

Mr. Parry also used the opportunity to thank her for the Medical Cooperation established between Cuba and Nevis, as a number of Nevisians were presently in Cuba receiving specialized health care.

“I am so pleased with all of the assistance Cuba has given Nevis by giving scholarships to Nevisian students for higher education at Cuban University’s and the abundance of Health Care assistance the island has received from Cuba over the years,” stated the Premier.

St. Kitts and Nevis had established diplomatic relations with Cuba on April 28th, 1995.

Medical cooperation between Cuba and St. Kitts-Nevis began in 1996 with the arrival of the first group of Cuban doctors, who along with health technicians have been working at a number of hospitals throughout the Federation.

In October, 2009 a Cuban Ophthalmologist performed an historic congenital cataract surgery on a one year old Nevisian child at the J.N France General Hospital in St. Kitts.

In response to the numerous accolades bestowed on the Cuban Ambassador from the Hon. Dr. Denzil Douglas, Ministers of his Cabinet and a number of resident Cuban-St. Kitts-Nevis organization Presidents, Ambassador Suarez spoke of the highpoints in the relationship between Cuba and St. Kitts-Nevis, in particular, in the field of Health Care, Sports and Culture.  Ms. Suarez also mentioned that she sincerely enjoyed her time in the Federation especially with her interaction of the island’s people.