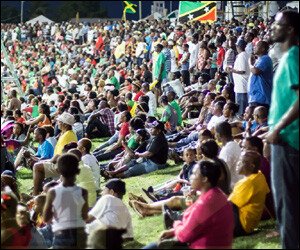 “We have been able to advertise the country [to a global audience],” he said, while being interviewed by cricket broadcaster Ian Bishop during Saturday’s game between the Trinidad and Tobago Red Steel and Guyana Amazon Warriors. That game was preceded by a victory for the St. Kitts and Nevis Patriots over the Jamaica Tallawahs which moved them to third in the tournament standings.

Minister Richards commended local fans for their support of the team, noting that it gives extra motivation to the Patriots to play on home soil. He felt that support first hand when he suited up for the Prime Minister’s XI at an all-star charity T20 game on July 02. The match raised US $10,000 to benefit the St. Kitts-Nevis National Education Foundation which provides scholarships and grants to disadvantaged youth in order to advance their academic goals.

The development of current local players and the inspiration of a new generation were listed as another benefit of having a CPL franchise based at the Warner Park cricket stadium. Two thousand tickets have been allotted for students to attend the matches to see world class athletes perform. Additionally, a transfer of knowledge in coaching, batting, bowling and fielding techniques is expected, that will help to shape future players who can represent on the regional and international field.

“You can’t just look at the returns in terms of a dollar figure,” Minister Richards explained.

CPL’s debut in St. Kitts and Nevis last year generated an estimated US $26 million in economic activity. This included a picture postcard campaign that was valued at more than US $500,000 while brand awareness estimated to be around US $4 million.

That commitment runs until 2019 based on contractual arrangements between the government and CPL executives.