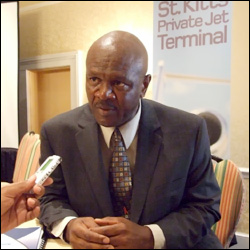 Chairman of the St. Christopher Air and Sea Ports Authority (SCASPA) Mr. Linkon Maynard recently announced that the ongoing upgrade to Port Facilities is being carried out with a keen eye on sustainability and cost effectiveness.

He explained that while it was important to envision the needs of the future, it is also wise to be cognizant of the economic environment so as not to put further strain on the economy.

In an interview with SKNIS Perspectives, the Chairman noted that SCASPA has been charged with the mandate to develop the most critical infrastructure of the tourism industry. Maynard said that over the years a substantial amount of Government expenditure has gone into such development, including the expansion of the Airplane Parking Facility in 2006 and the resurfacing of the 8000 ft runway which cost approximately U.S. $25 million dollars.

At the seaport, the Revetment Project which involved the construction of the more than U.S. $20 million retaining wall along the Bay Front was another of SCASPA’s projects. He emphasized that without that facility, Port Zante would be very vulnerable to storms as was the case in 1995 and 1998 with Marilyn, Luis and Jose.

Chairman Maynard said while these projects were costly, they did in effect “help people to sleep a little easier knowing that they are safe or knowing that they have the facilities that will encourage tourism and safeguard their livelihood.”

As it relates to future projects projects, Mr. Maynard said his entity is being deliberately selective and cautious, while giving consideration to critical needs as demanded by competitiveness in the industry.

Additionally, Mr. Maynard said SCASPA is very much aware of the needs of the local community, particularly the need for an upgrade to the ferry terminal. As such, a development concept for the entire Basseterre Harbour has been designed.

In other updates, the old Sugar House at Bird Rock is being converted into an office and warehousing facility.  At the Airport plans are underway for an upgrade which he referred to as “likely to be the envy of the Caribbean.”  Referring to the private terminal facility, he said the profit sharing arrangement between SCASPA and Veiling Ltd. and the policies which will be in place at the airport would bring spin-offs and benefits to the public in general.

Recent upgrades at the airport include the repositioning of the toll booth to allow for toll-free pick up and drop off of passengers as well as spaces dedicated for handicapped parking and benches for individuals waiting for arriving passengers.