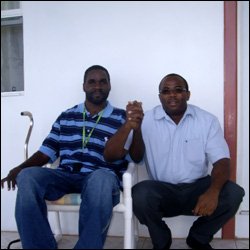 A soldier in the St. Kitts-Nevis Defence Force, severely injured in the line of duty by gunshot three years ago, has officially received a new two-bedroom home.

Prime Minister and Minister of National Security, Hon. Dr. Denzil L. Douglas in brief remarks before handing over the keys to Corporal Joseph Bergen, said he was honoured, proud and privileged to participate in the simple ceremony which signifies the empowerment of the soldier with property ““ the land and the home donated by the Government of St. Kitts and Nevis.

Dr. Douglas expressed thanks to Corporal Bergan, who is incapacitated, for his “service of dedication, distinction and sacrifice.”

“Serving not only the St. Kitts-Nevis Defence Force, but serving the people of St. Kitts and Nevis and serving the Nation, that I believe he loves and we all love so much,” said Prime Minister Douglas.

He expressed thanks to the St. Kitts-Nevis Defence Force, especially Lt. Colonel Patrick Wallace, for the support given to Corporal Bergan not only during the critical period immediately after the near-fatal injuries, but for the continued support following the incident.

“I want to thank his mother and the other members of the family for the tremendous support provided to Corporal Bergan. I have been at her home where Mr. Bergan was living on several occasions and I know the tremendous love she has for her son and to a large extent this day is a very happy moment for her as she witnessed her son’s advancement in life despite the injuries he suffered,” said Dr. Douglas.

“Corporal Bergan, we wish you God’s blessings as you make this building your home,” said Prime Minister Douglas to Bergan. He further told the newly-wed: “As a medical doctor I would want to enjoy the privilege and honour of seeing little, little Bergans running through this property. We all wish you well and may this home be a one of blessing and comfort and may it bring you the peace that you deserve.”

Cpl. Bergan in accepting the keys thanked God the Almighty and all those who participated in constructing his new home.

“I would like thank the Prime Minister and his team for their assistance from the initial stages of my injuries, the members of the St. Kitts-Nevis Defence Force, especially my respective superior officers and all others who participated in the construction and  completion of this my new home,” said Bergan.

Prime Minister Douglas thanked several persons, businesses and institutions for the role played in ensuring the completion of the home.

Lt. Kevin Williams, who designed and constructed the home, Cpl. Calvin Mitcham, Lance Corporal Charles Bowry and Pvt. Sheldon Hamilton, who worked during the entire construction period, Lance Corporal Leroy Huggins, Pvt. Elroy Stapleton and civilian Larry Scarborough were thanked for their building skills and labour towards the erection of the house.