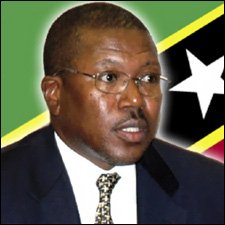 Prime Minister Denzil Douglas’ hypocrisy was called into question today when it was revealed that his convicted Attorney General, Dennis Merchant, is also a citizen of the United Kingdom. Last month, Merchant was convicted of contempt of court for violating a court ordered injunction.

PAM Candidate for Change Glenroy Blanchette called out the Prime Minister for his hypocrisy.

“Denzil Douglas’ hypocrisy is incredible. On the one hand, he continues to spin terrible rumours about Lindsay Grant and Shawn Richards, two proud, born and raised Kittitians who love the Federation, and, on the other hand, he continues to employ an Attorney General who was not only convicted for contempt of court, but, also holds a dual citizenship with the United Kingdom,” said Blanchette. “If Denzil Douglas is so concerned about this issue, why is Dennis Merchant still Attorney General? If Denzil Douglas’ hypocritical attacks were based in principle and not in politics, there is no way Dennis Merchant would’ve ever been appointed Attorney General.”

“It’s been weeks since Dennis Merchant was convicted of a very serious offense. Why hasn’t the Prime Minister relieved him of his duties?” asked Grant. “For the Federation’s Attorney General – a man who is supposed to be a legal expert – to be convicted of contempt of court for violating an injunction is a very serious matter.”

Grant concluded, “What kind of message is Douglas sending to our kids? That you can violate the courts and retain your job as Attorney General? There’s a crime and murder crisis in this country and that’s exactly the wrong message we need to be sending. It’s time for Denzil Douglas to stand up for the rule of law and sack the Attorney General.”