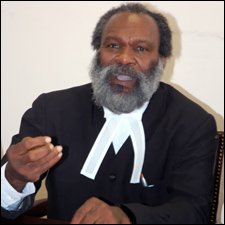 The Constituency Boundaries Commission (CBC) case was adjourned Friday afternoon to Monday 7th December to allow the Secretary of the CBC to verify the transcript of the discussion held on November 11th.

Counsel for the Government, Dr. Henry Browne informed His Lordship Mr. Justice Frances Belle that he had earlier told the Court that the transcript submitted to the Court and the Claimants, had been done by the staff of the Registry.

He said it has since been discovered that persons other that the staff of the Registry had assisted in transcribing the session.

Dr. Browne said that as a result it has become necessary for the Secretary of the Commission, who was present at the proceedings to verify the accuracy of what was said at the November 11th meeting.

He said this would be done on the weekend and would be ready for Monday to ensure that all is in order.

Dr. Browne indicated that he had informed Counsel for the Claimants, Ms. Constance Mitcham and would have no resistance to a request for an adjournment until Monday.

Ms. Mitcham said she had no objection to request.

Justice Belle was in agreement and said it was necessary to ensure that the transcript was accurate.

He said it was important that justice cannot be rushed as the transcripts must be relied upon and the necessary oath taken.