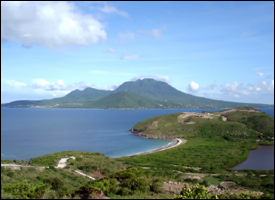 The South-East Peninsula of St. Kitts
Photo By Erasmus Williams

A blend of history, God-given assets, its people, small space, lush rainforest and beautiful beaches are some of the attributes of St. Kitts, says Minister of Tourism and International Transport, Sen, the Hon. Richard Skerritt St. Kitts in a feature on CNN’s Airport Network “Adventure and Relaxation on St. Kitts.”

“We like to think that in St. Kitts, we are very special, still vey authentic Caribbean island and we have just what you imagine an island is. We exceed expectations all the time. People leave here charmed and in love with the island and want to come back,” he told CNN’s Catherine Callaway, during an interview for a ten-minute episode on St. Kitts, to be viewed by over 100 million persons.

According to Callaway, “from the first glimpse of its rolling hills and turquoise waters, St. Kitts captivates with the allure of a Caribbean paradise. Yet the island is relatively undiscovered.”

“No visit to St. Kitts would be complete without a climb to the top of Brimstone Hill Fortress ““ a UNESCO World Heritage Site,” said repotted Callaway.

“While hurricanes have claimed some of the artifacts, the fortress itself is as imposing and solid as it was when it was first built in 1690. It took about 100 years to build and is a testament to what was back breaking labour,” said Eric Wechter, a Fodor’s Editor.

Callaway said the challenge for St. Kitts in moving forward “is to develop tourism that honours the island’s rich history while it preserves its natural beauty.”

Cathy A. Preece, VP & Accounts Supervisor of Adams Unlimited said the CNN Airport Network is broadcast in 46 top US airports including JFK, MIA, ATL, CLT and most feeder cities.

It is seen by over 20 million viewers per month and reaches 93% of the traveling US public, a market which is clearly predisposed to travel.

“The show is slated to appear a total of 4-5 times over the course of the year following its initial airing.  The show will also appear in the travel section of CNN.com, which has online viewership in the millions therefore, total viewership is estimated at over 100 million,” said Preece.

The video can be seen at the following link after a short advertisement.