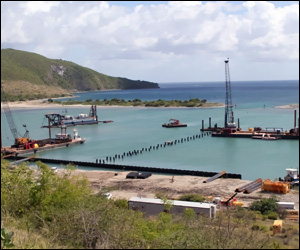 St. Kitts and Nevis‘ Prime Minister the Right Hon. Dr. Denzil L. Douglas says the construction of Christophe Harbour’s Marina is a welcomed development and is of benefit to all sectors of the society.

He said when the multimillion dollar Christophe Harbour Project on St. Kitts’ South East Peninsular was approved his St. Kitts-Nevis Labour Government was keenly aware of the role a marina will play and the new income streams that this development would generate for the local economy.

“From workers to lawyers, from truckers to accountants, from marine works specialists to security personnel and on and on, we understood the ability of this project to inject new revenue streams into our economy.  We were mindful of the workers and the independent contractors who would ““ both now and far into the future ““ see their economic interests dramatically enhanced.  And whether we look at The Beach House, whether it is at the Pavilion, or SaltPlage, whether we look at the purchased house lots or the myriad services and purchases associated with these transactions, we all know a range of Kittitians and Nevisians who have been positively impacted ““ economically – by each of these sub-sets of the Christophe Harbour development coming eventually on stream,” said the Prime Minister.

According to the St. Kitts and Nevis leader, this same phenomenon applies where the construction of the marina is concerned.

“Both local workers, as well as local enterprises like the local St. Kitts Marine Works are contributing to ““ and benefiting from ““ this project, bringing into reality my Government’s joint objectives of facilitating the expansion of a successful and vibrant Christophe Harbour here on the peninsula, and (ii) creating and increasing revenue streams for the people of this proud and progressive country ““ throughout the Federation, and across the economic sectors,” Dr. Douglas said.

Congratulating all the major players including the Sugar Industry Diversification Foundation (SIDF), which has a 30 percent stake in the development, Prime Minister Douglas pointed out that the Christophe Harbour vision is unfolding.

“Project by project, the Christophe Harbour vision is being transformed into a reality,” said Prime Minister Douglas.

“Let us, then, all maintain our focus. Let us not be distracted by the naysayers. Let us all maintain our drive. And let us all, each of us, do whatever is required of us for the growth and stability of our Federation that we all so dearly love, and for the success and vibrancy of Christophe Harbour,” Dr. Douglas said.