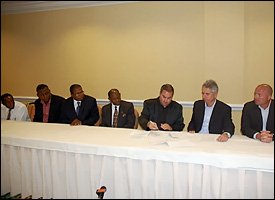 The first phase of the project, at a cost of which will cost US$125 million, will see the construction of four buildings comprising 270 units on the 10-acre site of the former Angelus Resort. The company also owns an additional 12 acres adjacent to the St. Kitts Marriott Beach Resort and Royal Beach Casino, the Marriott Vacations Club and the Royal St. Kitts Golf Course.

“This branding indicates the ongoing confidence of the Marriott Organization in the people and Government of the St. Kitts and Nevis as it continues to support the development on the Island of St. Kitts,” the company said in a statement following the signing of the agreement with Century 21 Island Reality on Wednesday.

Although they have several offices throughout the North Eastern Caribbean, Century 21 Island Realty is a new member of the St. Kitts business community, having recently opened an office in Port Zante.

“We welcome them and wish them great success on St. Kitts and with the St. Kitts Marriott Condominiums,” said the statement.

President of Operations at Century 21, Mr. Daunesh Alcott, who signed on behalf of the company expressed excitement with the investor-friendly climate in St. Kitts and the development projects that are moving full steam ahead.

The Marriot Condominiums, with all of its already-built amenities and impeccable reputation, will certainly be one of the most sought after residences for buyers who wish to live or invest in St. Kitts.  I also believe that having the largest real estate company in the world, Century 21, affiliated with the Marriott Condominiums will be great for both organizations,” said Alcott.

He added that it will provide potential buyers with an extra level of comfort and security when purchasing these great new condos.”

“We are putting the finishing touches on the website and collateral materials and look forward to releasing more information about this great project shortly.”

The first phase of this expansion will encompass 10 acres of the former Angelus property and the development cost is estimated to be in excess of US$125,000,000.