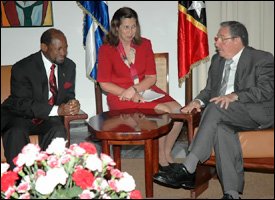 St. Kitts and Nevis hopes the new United States Administration of President the Hon. Barak Obama will lead to more friendly relations with Cuba and Venezuela ““ two allies of the Caribbean countries.

“We feel very strongly that Cuba can be seen as one of the important members of the Caribbean community and that the time for the continued isolation of Cuba is really at an end,” St. Kitts and Nevis Prime Minister and Minister of Foreign Affairs, Hon. Dr. Denzil L. Douglas told the BBC Caribbean Report in a telephone interview.

The St. Kitts and Nevis leader is of the view that if there is to be the promotion of democracy, good governance and the improvement in the quality of life of the Cuban people, it was time to end the 50-year trade and economic embargo of Cuba by the United States.

Prime Minister Douglas is also of the view that the Caribbean Community (CARICOM) is in a position at this time to assist in improving the relationship between the Obama Administration in Washington and the Hugo Chavez Government in Caracas.

“The Caribbean to a large extent can hold a meeting in which there can be a smoothing out of the relationship between Venezuela and the United States of America. Venezuela has been a very important ally and support to the Caribbean Community of nations in recent times.

The United States of America is in fact our great partner and neighbour to the North,” said Prime Minister Douglas, adding that the United States and Venezuela will have to begin to accept each other.

“We believe that the Caribbean Community of nations at the hemispheric meeting would be able to bring this notion across so that both can begin to speak and normalize their relationship,” said Prime Minister Douglas.