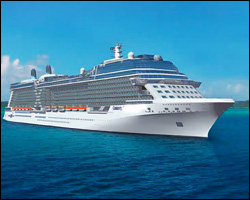 Plans are being finalised for the inaugural call of Celebrity Cruise Lines newest ship, the Celebrity Eclipse.

The 122,000 ton cruise ship, built at a cost of US$750 million and launched and christened this year, docks at St. Kitts’ Port Zante on Wednesday 23rd November.

It departs Miami and stops in Philipsburg, St. Maarten and San Juan, Puerto Rico before berthing at Port Zante. On the seven-day cruise, three days will be spent at sea.

The Celebrity Eclipse is the third in the planned five-ship Solstice-class of Celebrity Cruises and is the sister ship of the Celebrity Solstice and Celebrity Equinox, which entered service in 2008 and 2009, respectively.