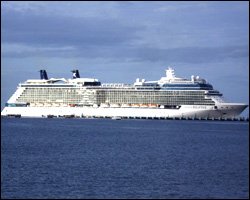 Even before it is deployed, St. Kitts is on the itinerary of Celebrity Cruises newest ship for the 2011/2012 cruise season.

As the fourth ship in Celebrity’s award-winning Solstice-class, the “Silhouette” will offer 12-night Eastern Caribbean and Southern Caribbean cruises round trip from Cape Liberty, New Jersey from November 6, 2011 to April 10 of 2012.

The Silhouette will depart on her inaugural sailing July 23, 2011 with a 7-night cruise that will include Italy, Germany and Spain. Then, from August to mid-October 2011, she’ll continue with a series of unique 9 to 13-night Mediterranean and Holy Land cruises (round trip from Italy) which, depending on the sailing date selected and the length of the itinerary, will include several ports in Italy as well as Greece, Croatia, Egypt, Greece, Turkey, Jerusalem and / or Israel.

Almost immediately upon receiving the news from Celebrity Cruises about the deployment of the “Silhouette,” Direct Line Cruises sent a promotional announcement to their clients (via DLC’s e-mail newsletter) offering an onboard credit of up to $200 per stateroom for advance bookings on the Celebrity “Silhouette” that are made by April 19, 2010.