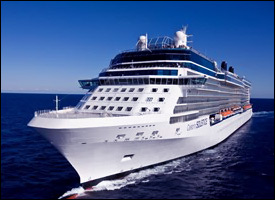 Celebrity Cruises newest ship will have St. Kitts’ Port Zante on its itinerary for the 2011/2012 cruise season.

The 122,000-ton, 2,884-passenger Celebrity Silhouette is sister ship of the Solstice, Equinox and Eclipse in Celebrity’s award-winning Solstice-class, which visited St. Kitts during the 2010/2011 Cruise Ship Season.

The Silhouette will offer 12-night Eastern Caribbean and Southern Caribbean cruises round trip from Cape Liberty, New Jersey from November 6, 2011 to April 10 of 2012.

The Silhouette will depart on her inaugural sailing July 23, 2011 with a 7-night cruise that will include Italy, Germany and Spain. Then, from August to mid-October 2011, she’ll continue with a series of unique 9 to 13-night Mediterranean and Holy Land cruises (round trip from Italy) which, depending on the sailing date selected and the length of the itinerary, will include several ports in Italy as well as Greece, Croatia, Egypt, Greece, Turkey, Jerusalem and/or Israel.

While Celebrity Silhouette will share basic design and layout of its sisters, there will be a number of tweaks, including new cabins, changes to the Lawn Club, a popular staple on the in-service Solstice-class trio and an overhaul to Celebrity’s signature Michael’s Club.