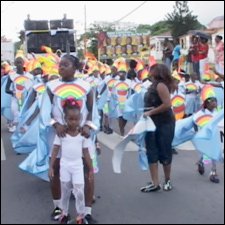 Fireworks lit up the sky last night as the Prime Minister’s Extravaganza brought an end to festivities marking the 2009/2010 National Carnival Season and the start of a new decade.

Thousands flocked to the Warner Park cricket stadium to enjoy the free concert which was headlined by Jamaican reggae sensation Serani. Reports suggest a fulfilling experience and equally satisfying were the positive reviews for the just concluded carnival season.

“Carnival was awesome,” stressed Jethro Walters, a visiting national who spent ten years away from St. Kitts. Walters, returned initially for the festivities in December 2008 and had “a wail of a time” from the sidelines as a spectator. Feeling the urge to do more upon his return last month, he borrowed a clown folklore costume from a friend, learnt a few basic moves, and took to the road for the Grand New Year’s Day Parade, and Last Lap on January 2, 2010.

“I didn’t really know what to expect since this was my first time participating,” Mr. Walters told SKNIS. “It was a great experience and I will do it again and again.”

The young man also had high praise for the staging of the various shows and pageants that took place over the December 18 to January 03 period.

Local reveler Orelma Prentice echoed similar sentiments. The highlight for the young lady was the parades through the streets as well as the January 1, Carnival Reggae Bash and January 3, PM Extravaganza.

“The troupes were really colourful and a lot of people turned out to support carnival,” she said. “The event was better than last year’s.” Ms. Prentice stated, adding that she intends to join a troupe during the 2010/2011 celebrations. As for the concerts, Prentice said they add to the profile of the local festivities and she would like to see the continuation of such activities.

Executive Director of the Festivals Secretariat, Allister Williams said he was pleased with the general outcomes of carnival. He explained that the global economic difficulties presented challenges in terms of sponsorship but added that there was a marked attendance increase for major shows. Additionally, Williams reported increases in spectators viewing the parades, and sales for vendors which made the St. Kitts and Nevis National Carnival 2009/2010 a success.

A finale press conference will be held in the near future to give stakeholders and patrons another opportunity to provide feedback on the event and the way forward.