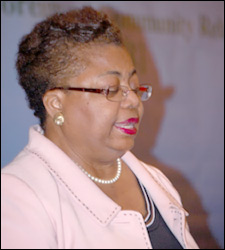 The Acting Secretary-General of the Caribbean Community (CARICOM) Her Excellency Ambassador Lolita Applewhaite is warning that survival in the current global environment demanded a commonality of ambition and vision to ensure the strategic positioning of the Community in the hemispheric and global arena through the effective coordination of its external relations.

Addressing the Opening Ceremony of the 14th Meeting of CARICOM’s Council for Foreign and Community Relations (COFCOR) at the St. Kitts Marriott Resort and Royal Beach Casino on Wednesday, she said that it is through diplomacy that small states such as those in the Caribbean Community (CARICOM) make their mark on the international community.

“It is the force of ideas and creativity that are our strengths as we grapple with the issues and attempt to make a difference in the international arena. It is the use of these strengths that give our small states a voice on equal terms with the most powerful states to advance those issues which are of particular concern to us,” Ambassador Applewhaite said.

The acting Secretary-General said that in pursuing that path of diplomacy, the Caribbean Community must utilise all its tools and skills adroitly and none more so than the co-ordination of its foreign policy.

“This important weapon in the diplomatic arsenal of the Community is one of the four pillars on which this Community rests,” the acting Secretary-General stated.

She said the strength of a coordinated approach had been most aptly demonstrated recently in the Community’s successful attempt to focus the world on the threat of chronic non-communicable diseases and it is as result of the region’s co-ordinated diplomatic advocacy that the United Nations High Level Meeting on Chronic Non-Communicable Diseases is being convened next September.

Ambassador Applewhaite said the Community’s coordinated approach to foreign policy had earned it the respect and admiration of the international community for independence of thought and adoption of sometimes controversial, yet courageous positions.

She pointed to the fact that twenty-two (22) foreign countries had accredited plenipotentiary representatives to the Caribbean Community and added that the Region’s principled positions and quiet, small-state diplomacy continue to stand it in good stead.