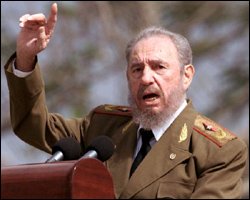 The bonds of friendship between member countries of the Caribbean Community (CARICOM) and the Republic of Cuba will be on display when CARICOM-Cuba Day is celebrated December 08, 2009.

The annual commemoration marks the signing of the Havana Declaration between heads of CARICOM member states and His Excellency Fidel Castro in Havana seven years ago.  December 08, 2002 also signified the 30th Anniversary of the Establishment of Diplomatic Relations between CARICOM and Cuba.

With the objective of informing the general public about the relationship between the regional body and the Republic, the local Ministry of Foreign Affairs has coordinated several activities including the airing of statements on ZIZ Television by Prime Minister and Minister of Foreign Affairs Honourable Dr. Denzil L. Douglas and Cuban Ambassador His Excellency Jorge Payret (pronounced Horhay Pirate) on CARICOM-Cuba. The Ambassador will appear live on Sugar City Rock’s “Journey” Morning Show on the same date.  A pamphlet with facts about Cuba and the relationships between Cuba and St. Kitts and Nevis, and Cuba and CARICOM will also be distributed to high schools in both St. Kitts and Nevis and the Clarence Fitzroy Bryant College during the week of December 07.  WINNFM’s Musicology programme will feature Cuban music and artists on its December 07 show from 8:00 to 9:00 p.m.

The relationship between CARICOM member states and Cuba is such that nearly 3,500 Caribbean students have graduated from Cuban institutions of higher learning since 1961, some 1,500 of them from the medical field.  Locally, the health sector has benefited from doctors, nurses and other medical professionals in a range of disciplines from obstetrics to ophthalmology.

Additionally, a Cuban specialist is presently in the Federation assisting with an assessment of the Green Vervet Monkey population.

CARICOM in turn consistently supports Cuba by voting in favour of the United Nations General Assembly Resolution pertaining to ending the financial, commercial and economic embargo imposed by the United States against Cuba in 1962.

The Government of St. Kitts and Nevis takes the opportunity to wish the Government and people of the Republic of Cuba well and continued productivity as CARICOM-Cuba Day is celebrated.