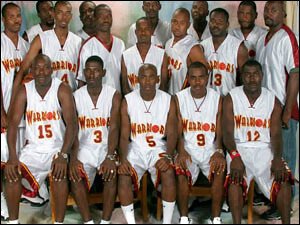 Four of the Caribbeans top Club teams will be in St.Kitts to take part in the Official Opening of the Basketball season there. Basketball City will once  come alive on Sunday April 11th  when the St.Kitts Amateur Basketball Association (SKABA) hosts the Champion Basketball teams from neighbouring Antigua & Barbuda and the British Virgin Islands. The two teams are expected to be on island by Saturday April 10th  and will engage local club teams in matches on Saturday and Sunday evenings. The visiting basketball teams are the Defense Force Warriors the 2010 Antiguan Super 8 champions and Talk Dat the BVI Basketball Federation 2009 Champions. Featured host teams are 2009 defending SKABA Champions Horsfords Ghetto Roots and former Champions Rams Hitters

On Saturday The Warriors will engage the Champion team from the Challengers Community League in Challengers. The team will then play former SKABA national champions the Rams Hitters on Sunday in Game 1 of the highly anticipated official opening of the 2010 SKABA League. The BVI Champions Talk Dat will play the Defending SKABA Champions the Horsford’s Ghetto Roots in Game 2 on the opening night of the LIME sponsored league.

According to officials of the Antigua team the players are keenly anxious to play Hitters once again here on St.Kitts. According to coach Bradbury Browne the Warriors are looking forward to matching their skills against the St.Kitts Champions Hitters. Browne indicated that he was keen on viewing how well his team will match up against one of the top clubs in St.Kitts once again. The Warriors defeated Hitters on the opening night last season and the Hitters will be certain to try and exact some revenge after being defeated on their home turf in front of thousands of their hometown fans.

“I expect another exciting and keenly contested match-up  and bearing in mind that we suffered a tough loss to the warriors last year we are definitely excited and anxious to face them once again to redeem ourselves after the tough lost last year,” said Hitters Coach James “Barman” Hanley. “We have been in training for some time now in preparation for the start of the league and the Antiguan Super 8 Champions will be the perfect team to guage our readiness for the 2010 season,” Hanley continued.

Hitters this year will feature the basically the same team that suffered a clean sweep loss in the 2009 finals against the Horsfords Ghetto Roots. 30 year veteran and regional Basketball Legend Trevor “Marty” Huggins will once again for part of the core of the Hitters team along with Shawn Ã¢â‚¬ËœShabba” Forbes and Marlon “Jah Love” Powell.

Defending Champions Ghetto Roots are making moves to further strengthen their 2009 championship squad. Sources close to the team are suggesting that former National Junior Players Halstead “Hally” Isles and Ruel “Criagy” Nero are expected to return to the team after extended layoffs due to injury. Also expected to return to the Ghetto Roots is former National Players Kiethley Hicks and Lyle “Dixie” Duggins both of whom are expected to transfer from the St.Pauls Tuff Knots and Fig Tree Dirt Revellers respectively. Hicks last played with Ghetto Roots in 2007 while Duggins played with the team during their tour of Antigua in 2009. The Ghetto Roots is expected once again to be led by SKABA 2009 MVP Rymal “Bally” Browne along with  national guard Levi “By-By” Fyfeild in addition to Carlos “Spanish” Monzac and Troy “Jasbo” Wattley .

“2009 was certainly a good year for our club. We not only won the National title convinvingly with a clean sweep victory over Hitters but the Club featured more teams in one season than any other club in SKABA history with a Premier,”A”,Junior and Female teams, said Ghetto Roots Club General Manager Wallis Wilkin.

“We are in the process of strenghtning the structure of the organisation and the teams and as a result we have brought on board Dwayne Sturge who will fortify the clubs coaching and Management staff .In addition we have welcomed back a few players who were members of the team in the past but were absent over the last few years for various reasons. These additions will certainly strengthen the team and Organisation. Coach Garfeild Alexander did an excellent Job in 2009 and I am confident that he will once again lead us to the National Championship once again ,” the Ghetto Roots Manager continued.

When asked about which teams was expected to provide the most formidable challenge to Ghetto Roots repeat championship hopes GM Wilkin said “I am not at all concerned,worried or phased by any team. I concern myself with the performance and attitudes of my players. Once that is honed,monitored and developed there is no team in the OECS much less St.Kitts that can beat Ghetto Roots in a  3 or 5 game championship finals,”.

Another finals berth is a foregone conclusion for the defending Champions as the team is packed with some of the most talented players in the league.

The 2010 season tips off at 5:00 pm on Sunday April 11th with the traditional march past and 2 match-ups including 2009 finalist Rams Hitters vs Antigua Super 8 Champions Defense Force Warriors in game 1 and the BVIBF Champions Talk Dat vs SKABA Champions Horsfords Ghetto Roots.