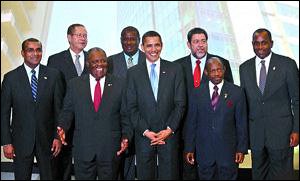 Caribbean leaders on Saturday said United States President, the Hon.  Barack Obama will discuss economic aid, gun and drug smuggling and other issues in a second round of private talks with them later this year.

After meeting with the U.S. president on the sidelines of a hemispheric summit in Trinidad, Caribbean presidents and prime ministers described a new tone in U.S. policy and expressed hope for closer ties.

“The U.S. is not lecturing to us anymore, but rather listening,” Guyana President His Excellency Bharrat Jagdeo said, adding: “They need to listen, and that is what we got.”

Caribbean leaders said they also asked Obama to oppose a crackdown on so-called tax haven nations, insisting that offshore banking and corporate registries are key to diversifying their island economies. They gave no details on his response.

Canadian Prime Minister His Excellency Stephen Harper also met with the Caribbean delegation on Saturday to review a pending free-trade agreement between Canada and the Caricom trade bloc.

A date for trade talks has not been set.