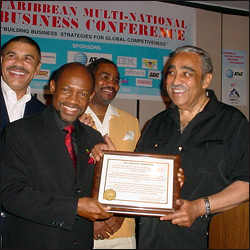 St. Kitts and Nevis Prime Minister Hon. Dr. Denzil L. Douglas said a Memorandum of Understanding signed between the University of the West Indies (UWI) and the Medgar Evers College in New York would form the basis for moving forward after the Caribbean-New York Conference last week.

Speaking at the signing, Prime Minister Douglas, the Lead Head of Government for Education and Health matters in the CARICOM Quasi Cabinet, said the engagement on Thursday needed to arrive at some concrete elements of a plan for collaboration.

Among the priorities Dr. Douglas suggested that should arise from the Conference were greater collaboration in research and training through the establishment of CARICOM-New York Fellowships and a special Fund dedicated for exchange at the staff and student levels; a concerted effort to push the frontiers of knowledge by placing emphasis on areas of Research and Development, especially in areas such as tourism, transportation and climate change and establishing common areas of research and outreach that are particularly aimed at improving the quality of life of citizens in the Caribbean and New York in such areas that connect education to health, trade, culture and promote greater public awareness especially to reduce the spread of HIV/AIDS, prevention of NCDs advancing cultural industries and thereby capitalising on some of the assets of the Caribbean Diaspora.

Prime Minister Douglas also suggested the involvement of the private sector both in the CARICOM Community and New York to sponsor goodwill tours to enhance the understanding of groups and stakeholders that share common cultural and educational objectives; placing greater emphasis on promoting courses on Caribbean Studies and the American connections in the region’s Tertiary Learning Institutions (TLIs) and establishing a Charles Rangel Professorship to commemorate this momentous occasion in the annals of Caribbean-USA relations.

The Memorandum of Understanding (MOU) will foster greater ties between the two tertiary institutions in specific areas of importance to the Caribbean and the Diaspora in New York.

Professor Nigel Harris, UWI Vice Chancellor and Dr. Edison Jackson, President of the Medgar Evers College signed the MOU at the Education Symposium at the New York Marriott at the Brooklyn Bridge.

The signing came at the end of the Opening Ceremony of the Symposium which was staged as part of the two-day New York Conference on the Caribbean which began 19 June. The Symposium was held under the theme “Strengthening Collaborative Ties between New York and CARICOM Higher Education Institutions.”

The Conference is geared at boosting existing ties with the United States in general and New York in particular, in the areas of education, trade and investment.

In a brief statement, Professor Harris extended gratitude to Dr. Jackson for making the symposium possible, and indicated that though UWI and Medgar Evers had signed other similar documents, this one was special since it was aimed at building a relationship in areas of relevance to the Caribbean and to the Caribbean Diaspora in New York such as youth development and immigration.

He expressed the hope that the MOU would usher in a partnership that would serve as a model for other relationships.