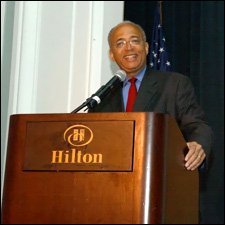 Bill Thompson, the grandson of Kittitian and Nevisian parents, who is challenging Mayor Michael Bloomberg for his job as Mayor of New York City has received the endorsement of United States Rep. Yvette Clarke. Thompson is currently Comptroller of New York City.

“Bill has the knowledge and the commitment to lead our city in the right direction. He knows that now more than ever New Yorkers need quality health care, affordable housing and access to essential services that improve their quality of life. I support Bill Thompson because he will deliver what New York needs,” said Clarke in a prepared statement.

The Thompson campaign highlighted the Democratic mayoral contender has “Caribbean heritage” – his grandparents came to New York City from St. Kitts and Nevis in 1916.

Clarke and her mother, Una, have a significant following in the Caribbean American community, and also are popular among the city’s Haitians, in part due to their efforts to help Councilman Mathieu Eugene, who is New York’s first Haitian-born elected official.