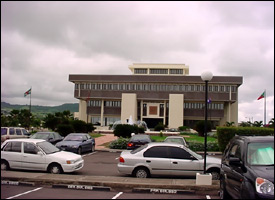 Member countries of the Eastern Caribbean Currency Union (ECCU) are to benefit from a Debt Management Advisory Service funded by the Government of Canada.

The ECCB said the service is designed to support measures to improve debt management in the Eastern Caribbean Currency Union (ECCU).

CIDA, represented by the Canadian High Commissioner for Barbados and the Eastern Caribbean, His Excellency Mr. David Marshall and Mr. Trevor O. B. Brathwaite, Deputy Governor of the Eastern Caribbean Central Bank (ECCB) on Monday noted the importance of debt management among the member countries of the Currency Union to enable the region to achieve a sustainable rate of economic growth.

Accordingly, the Canada – Eastern Caribbean Debt Advisory Service will help to establish appropriate institutional arrangements for effective debt management at the national level to aggressively manage and adjust debt portfolios; increase awareness and understanding of the implications of debt on growth and development; establish consistent standards for debt management among ECCB member states; and ensure up-to-date statistics and data on national debt, including consistent application of the Debt Recording and Management System developed by the Commonwealth Secretariat.

An important component of the programme involves the dissemination to the wider CARICOM region of best practices and lessons learnt.

High Commissioner Marshall expressed pleasure that Canada, through CIDA will partner with the ECCB in executing this initiative.

This project reflects the joint commitment of the Canadian Government and the member countries of the ECCU towards maintaining stability in the region through management of sustainable debt levels.