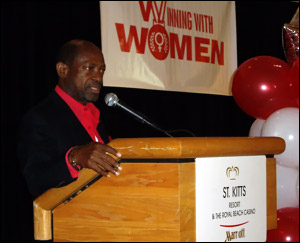 Former female sugar workers have been praised for purchasing government shares in Cable and Wireless (St. Kitts and Nevis) Limited and investing in Treasury Bills.

Dr. Douglas, who is also the National Political Leader of the governing St. Kitts – Nevis Labour Party said scores of women in the Federation were recently challenged by the closure of the centuries-old sugar industry and are now active participants in the creation and expansion of the new economy.

Prime Minister Douglas also urged the Women of Labour to ensure that their children make use of the education and job opportunities made available by his administration.

He called on the women, many of them who head the household to control their children.

“Know where you children are and take time out for them Spend time with them. Pray with them. Read with them and assist them in their school work. Mould them so that they can become the young men and women of the future and the productive citizens and leaders that this country will need,” said Prime Minister Douglas, who spoke of the initiatives taken by his government to reduce the coast of living and empower women through several training programmes.