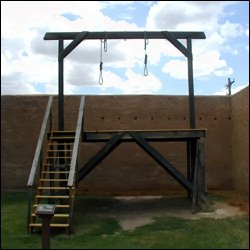 A British newspaper report on the recent court-ordered hanging of a convicted killer has resulted in deafening support of the death penalty from readers across the United Kingdom, the United States and several other countries including Indonesia, China, Australia and the United Arab Emirates.

“Good on St. Kitts and all other Caribbean nations wishing to keep and use the death penalty. The UK believes itself to be a democracy, but we know that’s not true. If that is the case then allow its people the choice for the return of the death penalty. Hold a referendum,” said David, an expat in Perth, Australia.

In a message to those he dubbed, “liberal humanitarians,” the Australian resident called on readers of the Daily Mail to “remember that hundreds of innocent; yes innocent, people have been murdered by those who were supposedly given ‘life’ sentences, or given bail for their crimes,” asking: “Where are your voices to denounce this awful fact.”

“Well hopefully this will stop the killings,” said Topaz in Crawley, West Sussex, while Linda in Nottingham said: “At last a government has seen sense.”

Cardiff resident, Graham Brekke said: “Well done. I will be a surprise to those who commit certain crimes to be given the death penalty, Soft laws and sentencing have given criminals cart blanch to do whatever they want. This island has had the good sense to state that enough is enough.”

Paul in Hull, England is of the view that it was “about time someone got tough with criminals, instead of pandering to them.”

A resident of Redhill in Surrey, England, said it was a shame that the British Government has not the guts to allow the British Public to vote in a Referendum to re-introduce the Death Penalty back in the UK.

“If they did then we could get rid of a few of our own scum bags, that we are currently paying millions of pounds of tax payers money to keep alive and well kept in prisons in the UK. Ask the parents of children that have been murdered in recent years what they think, ask the families of any elderly person who has been murdered for a few pence or life savings what they think…ask anyone who lives with the grief of having a loved one taken from them in a vicious act of murder..But hay we must consider these scum bags “Human Rights” Yeh Right!,” added MB.

Eric Richards in Aberdovey, Wales, wrote he was sure there will be the usual liberals condemning the hanging, but pointed out: “If you take someone’s life you should automatically lose the right to your life, period! The bleeding heart liberals always forget the victim, and their families.”

Tim Green in the United Arab Emirates is of the view that the United Kingdom Government could learn something from the St. Kitts hanging.

“At least the murderer who was hanged will never commit murder again. Unlike murderers in Britain who get released because British jails are full and the British Government is still considering/thinking about/planning new prisons,” wrote Malcolm Berry in Guangzhou, China.

“Hanging the odd one or two here and there probably won’t act as a deterrent. Make it 2 or 3 or more a week and then it might. However, the point really is that when they are dead there is absolutely no chance of them committing a crime again and it really will bring a sense of justice to the families of victims. We have one life so why should we allow anyone who knowingly takes a life to continue to live. And before we get the usual outcry from those who tell us about the innocents who have been hanged, whilst I would agree that one innocent is of course one too many it underlines the need for proper investigation and prosecution,” wrote Colin in Doncaster.

“Maybe the time has come for us to learn from these Caribbean Islands, rather than them learning from us. They are making a statement of purpose to eradicate violent crime by importing a crime buster and bringing back hanging, I personally think this will work.

Nothing else has otherwise violent crime wouldn’t be on the increase, time for our pussy footed ‘crime busters’ and legal system to get refreshed,” the reader wrote.