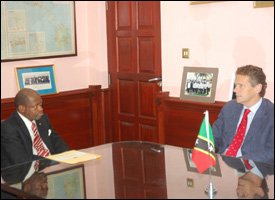 British High Commissioner to the Federation of St. Kitts and Nevis, His Excellency Duncan Taylor concluded his four year stint in the region with farewell visits to a number of Government officials.

In bidding Mr. Taylor farewell, Prime Minister Douglas said much has been accomplished during his tenure which has improved and solidified the good relationship between St. Kitts and Nevis and the United Kingdom.

Dr. Douglas made reference to assistance in the area of national security especially youth crime and gang violence and requested further assistance of the British in securing the Federation’s borders to curtail the illegal traffic in guns.

St. Kitts and Nevis has also received assistance from the British Government in addressing the stigma and discrimination attached to HIV/AIDS.

Prime Minister Douglas and High Commissioner Taylor, who is based in Barbados, also discussed several local and regional and international issues including the upcoming elections, the OECS-Trinidad and Tobago integration initiative, developments in CARICOM and financial services.