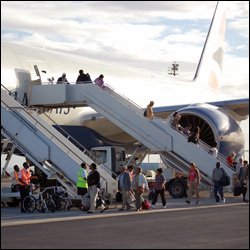 The St. Kitts-Nevis Labour Government’s tourism policy continues to reap dividends for the twin-island Federation with the announcement that British Airways is expected to bring 10,000 passengers to St. Kitts’ Robert L. Bradshaw International Airport by the end of the year and the numbers are expected to significantly increase in 2010.

This will be the highest number of visitors a weekly airline service has ever brought to St. Kitts over a 12-month period.

Minister of State, for Tourism, Sports & Culture, the Hon. Richard Skerritt said the BA arrival figures will surpass all expectations and the airline’s decision to begin operations to St. Kitts in these challenging market conditions, has proven to be a success.

This will be the largest number of visitors a weekly service has ever brought to St. Kitts over a 12-month period.

“We remain optimistic that passenger numbers will continue to increase well into 2010 as the travel business steadily regains momentum,” said Minister Skerritt in a statement released by the St. Kitts Tourism Authority.

According to advanced booking numbers, “we should reach the 10,000 BA passenger mark in December, and projections for 2010 are already looking promising.”

More than 10,000 passengers are expected to travel to St. Kitts from the UK during the first year since British Airways commenced operations in January 2009.

The figure will represent a 50 percent growth for the second half of 2009, after more than 4,000 passengers had travelled to St. Kitts on BA between January and June this year.

The growth in UK passenger numbers to St. Kitts is set to continue through 2010, following the start of BA’s second weekly service on 30 March 2010.

On the back of the new twice weekly BA service, the St. Kitts Tourism Authority has dedicated 2010 as “˜Celebrate St. Kitts’ year, to mark a programme of marketing and promotional initiatives, celebrating the key niche markets of Heritage, Culture, Sports and Cuisine.

The new mid week Tuesday flight will immediately increase capacity to St. Kitts while offering even greater flexibility to the duration of visitor nights.