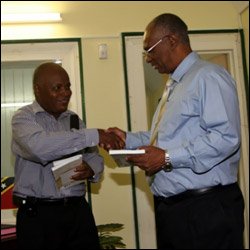 Premier of Nevis, the Hon. Joseph Parry on Tuesday received a complimentary copy of the book “Rivers of Time” from Freelance journalist Peter Ngunjiri. The presentation was made on behalf of British author and historian, Dr. June Goodfield.

“On accepting this book I must say that I am pleased that she has done research towards the great history of Nevis,” said Premier Parry.

“Rivers of Time”, is a story about an English woman, Mrs. Phillipa Prentis Phillip, who lived on Nevis in the Seventeenth century. Mrs. Phillip who arrived in Nevis in 1634 lived a dramatic and inspiring life, overcoming danger and adversity. She and her remarkable descendants, who have been traced for over two hundred years, helped lay the foundations of present day Caribbean society, according to the author.

Also attending the presentation were Cabinet Secretary, Mr. Ashley Farrell and Permanent Secretary of Tourism, Mr. Tyrone O’Flaherty who were also given copies of the book by Mr. Ngunjiri.

Mr. O’Flaherty in his acceptance of his copy, said he welcomed the book as another addition to the history of Nevis, which as he says, “has not been written in any significant way, except for snippets received in Caribbean history books.” He went on to say, that the book should go a long way towards educating people to what Nevis’ past entails.