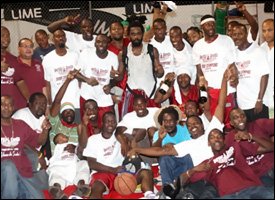 “I wish to extend heartfelt congratulations to the Management, Coaching Staff, players and sponsor of the Horsford’s Ghetto Roots Basketball Club for winning the 2009 SKABA Premier Division Basketball Championship,” said an exuberant Blanchette who was on hand to witness the game.

Mr. Blanchette also gave special commendation to the team’s sponsor, S.L. Horsford and Co. Ltd., for its “commitment to the Ghetto Roots organization over the past ten years.” He also stated that the company has been an “excellent corporate citizen through their steadfast commitment to community development through sports.”

“I must also congratulate the many dedicated fans who were a source of inspiration to the team throughout the tournament,” continued the former manager and coach.

“Indeed, the East Basseterre community is once again proud that the Ghetto Roots organization has captured the ultimate title in local basketball competition.  Victory was certainly not easy.  However, with hard work, determination, and a sense of purpose, the team was able to overcome years of falling short.  This latest victory is well deserved,” he said.

Mr. Blanchette wished the Ghetto Roots organization even greater success in the years ahead.

Blanchette managed and coached the Ghetto Roots Club for most of the 90’s where they were consistent contenders for the SKABA title. He was Coached the team when they won their last SKABA title in 1997.  He resigned as Manager and Coach in 2007.