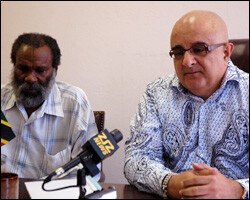 The lawyer heading the Legal Team for the Government of St. Kitts and Nevis, Mr. Anthony Astaphan, is dismissing as “political stunts” the resignation of the two CCM parliamentarians who resigned this week from the Constituency Boundaries Commission.

Mr. Astaphan charged that the two parliamentarians have abdicated their responsibilities under the Constitution and refuted the position of the Federal Leader of the Opposition, Hon. Mark Brantley that the Constituency Boundaries Commission is improperly constituted and cannot function following the resignation of the two members he appointed to the five-man body.

“The resignations of the two members appointed by Leader of the Opposition, which we can describe them conveniently as political stunts, does not prevent a Constitutional Commission and more specifically the Constituency Boundaries Commission in continuing its work and executing its mandate under the constitution,” said Mr. Astaphan in a statement to the Communications Unit in the Office of the Prime Minister (CUOPM) on Friday.

He said as a matter of constitutional law, Mr. Brantley is “totally and absolutely wrong.”

The Constitution of St. Kitts and Nevis says in Section 49 (4) ““ “˜The Commission may, subject to its rules of procedure, act notwithstanding any vacancy in its membership and its proceedings shall not be invalidated by the presence or participation of any person not entitled to be present at or to participate in those proceedings: Provided that any decision of the Commission shall require the concurrence of a majority of all its members.’

The resignation of the two member appointed by the Leader of the Opposition would now leave three persons in the Commission and that three by any mathematical construction constitutes a majority of a commission of five.

He pointed also to Section 117 (3) of the Constitution which deals with resignations and vacancies says as follows – Any person who has been appointed to an office established by this Constitution (other than an office to which subsection (1) or (2) applies) or any office of Minister established under this Constitution may resign that office by writing under his hand addressed to the person or authority by whom he was appointed and the resignation shall taken effect, and the office shall accordingly become vacant –

a) at such time or on such date (if any) as may be specified in the writing; or

b) when the writing is received by the person or authority to whom it is addressed, or by such person as may be authorized to receive it, whichever is the latter”.

The Dominica-born attorney of a Kittitian father said that it is clear that the letters were delivered to the Office of the Governor General as a result of which the resignations took effect and two vacancies created in the Constituency Boundaries Commission. There is a proviso to Section 117 (3), but that proviso has no application.

“I do not understand how fingers can be pointed legally or otherwise to a Commission doing its constitutional duties when in fact the members appointed by the Leader of the Opposition abdicated their responsibility and fail in their responsibility and legal duties to the people of this Federation by staying on the Constituency Boundaries Commission, performing their duties of the Constituency Boundaries Commission and if they think it necessary, prudent, expedient, right or fair to prepare minority reports, but that is not what they did,” said Astaphan, who pointed to a Dominica case in which the members who were appointed by the then Leader of the Opposition disagreed vehemently with the majority and prepare their own minority reports.

“So it cannot be right nor fair or proper for any person to suggest that there is something immorally, illegally, ethically or constitutionally wrong with the Constituency Boundaries Commission doing its work when those who had a duty to perform as well, jumped ship’,” said Astaphan.