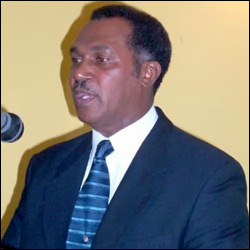 Lead Counsel for the Legal team, representing the government in the Constituency Boundaries Commission case brought by two opposition parliamentarians, Mr. Anthony Astaphan, is contending that the former member of the CBC, Hon. Vance Amory, is misleading the court in an amended Application filed late Wednesday afternoon.

Mr. Amory alleges that minutes provided to the Court does not reflect a true account of the proceedings on that day as no discussion took place on changes to the number and boundaries of St. Christopher and Nevis.

But Mr. Astaphan contends that Mr., Amory attended the meeting of November 11th at which the issue was discussed and the meeting was adjourned at his request to November 13th to continue the deliberations of the Constituencies on Nevis, but Mr. Amory never showed up for meeting on that date and tendered his resignation to the Governor General on November 16th.

Mr. Astaphan offered to make the audio recording of that meeting available to the Court and copies were delivered to the Registrar and lawyers for the claimants on Wednesday night.

Mr. Astaphan submitted to Justice Frances Belle that Mr. Amory could not be misled about the meeting’s agenda.

He referred to the evidence of the Leader of the Opposition, Hon. Mark Brantley, who in his cross examination in which he (Mr. Brantley) admitted under oath, that he knew the week before the 16th of November that Messrs Amory and Sen. the Hon. Michael Perkins were going to resign.

Mr. Astaphan reiterated that the meeting of November 13th at which matters were continued to be discussed was not attended by Mr. Amory because of the intention of both CCM members to resign on the 16th of November. Mr. Amory attended three meetings, while Sen. Perkins showed up for one meeting.

Mr. Astaphan also referred to correspondence sent to Prime Minister Hon. Dr. Denzil L. Douglas, requesting permission for the CBC to obtain maps and diagrams from the relevant public authorities in Nevis. He read from correspondence the granting of permission and from minutes that confirmed the receipt by the CBC of same during the meeting of November 11th.

“Mr. Amory did not come to the next meeting on the 13th November and he resigned on the 16th of November,” submitted Astaphan.

Senior Counsel Astaphan also responded to allegations by the Hon. Shawn Richards who expressed concern over remarks made by the Dr. the Hon. Earl Asim Martin at a political meeting.

He said the allegations of bad faith, bias and irrelevant considerations as pleaded cannot be proven and referred to the recent ruling of His Lordship Mr. Justice Errol Thomas, who in another Court concerning the CBC and opposition politicians found that the burden of proof in respect of bad faith, and bias is high and cannot be established by speculation.

Ms. Mottley in filing the new Application with supplemental affidavits requested all audio recordings of the CBC meetings.