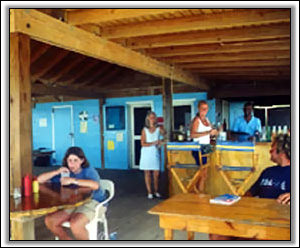 I have just heard but can neither confirm nor deny that Golden Rock’s Beach Bar on Pinney’s Beach is half way torn down.  While never as popular as Sunshine’s Beach Bar, it was a lovely place to go…much more quiet and refined than Sunshine’s.  I have fond memories of going here in the late 1980’s with my Parents and Grandparents.  This is where I first met my “infamous” friend Lobs.

Lobs used to work as bartender / short-order cook there for many years.  From what I Understand, Pam Barry, owner of Golden Rock, has no plans to rebuild.  Another piece of Nevis history gone for so called progress and crap “Tourist-Trap” hotels.  What a shame that the politicians only see dollar signs instead of history. :(

Oh well at least I still have the photographs.

PS….Golden Rock Beach Bar had arguably the BEST Lobster salad sandwiches on Nevis, if not the Caribbean.

1 thought on “Another Nevis Beach Bar Bites The Dust!”