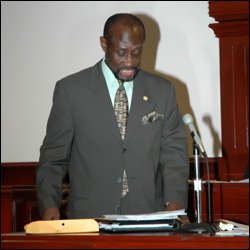 Deputy Prime Minister Hon. Sam Condor has again called for changes to the Federation’s 26-year-old independence constitution as it continues to stifle the social, political and economic development of St. Kitts and Nevis.

He said even in the recent High Court case brought by the opposition People’s Action Movement (PAM), seeking a judicial review of the Constituency Boundaries Commission Report at the Lee Llewellyn Moore Judicial and Legal Services Complex, lawyers on both the sides made comments about the constitution from Britain negotiated by the PAM Government of then Prime Minister Dr. Kennedy Simmonds.

“This Constitution is stifling the growth, progress and development of St. Kitts and Nevis and it needs to be amended. Everybody, including the People’s Action Movement are now saying that the Constitution needs to be changed,” said Condor, who added that the St. Kitts-Nevis Labour Party has always been critical of the agreement as it “does not represent the aspirations and ambitions of the people.”

He recalled that at the end of the Constitutional Talks in London in 1982, the St. Kitts-Nevis Labour Party did not sign the agreement.

The Deputy Prime Minister recalled former Labour Party parliamentarian, the late Hon. E. St. John Payne as saying of the Constitution, “when theory becomes practice we are going to see the fallacy, foolishness and stupidity of our constitution.”

Former Party Leader and then Leader of the Opposition, Sir Lee L. Moore is known for his strong statement on the Constitution.

“˜This Constitution that is being imposed on the people of St. Kitts and Nevis  fits a Club or Party Executive to keep the bad boys in check, but for a country it would only bring chaos and confusion,’ said Moore.

Earlier this year Deputy Prime Minister Condor blamed the constitutional nightmares that confront St. Kitts and Nevis on the People’s Action Movement (PAM) Kennedy Simmonds administration when it took the Federation into Independence in 1983.