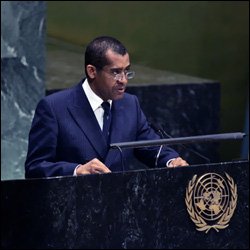 This was reaffirmed by St. Kitts and Nevis’ Permanent Representative to the United Nations, His Excellency Mr. Delano Bart, Q. C.

Addressing the Second Committee (Economic and Financial) of the 64th United Nations General Assembly on behalf of the CARIOCOM Member States, Mr. Bart noted the recently adopted General Assembly resolution 63/311 on system wide coherence, strengthening of the governance of operational activities for development should focus on enhancing existing intergovernmental bodies.

“CARICOM underscored the importance of ensuring the provision of adequate funding for operational activities for development on a timely and predictable basis, and in line with the national needs and priorities of developing countries,” said Mr. Bart.

He said that CARICOM members were of the view that the need for United Nations development activities in the sub region had increased significantly, given the myriad of development challenges faced by those countries, particularly in the areas of environmental sustainability, adapting to climate change, food security, combating non-communicable diseases, crime prevention and combating drug trafficking and other international crimes.

Mr. Bart further stated that the need for the United Nations development assistance had been made further acute, as a result of the impact of the current economic and financial crisis. In comparison to other developing countries and sub-regions, CARICOM member States received a very small percentage of overall official development assistance.

For the most part, such assistance, as a source of financing for development, was not available to the members. Prior to the onset of the economic and financial crisis, the options for the sub-region for sourcing financing for development were limited primarily to foreign direct investment and bilateral and multilateral lending agencies. With the onset of the crisis, the limited sources available to the sub-region had all but dried up.

He noted that the United Nations presence had been complementary and supportive of CARICOM Government’s development initiatives and played a fundamental role, given the existence of structural weaknesses that impeded full execution of development projects in cases where the States’ own means of implementation were weak.

In that regard, he stated that the maintenance of a significant field presence for the United Nations development system in the sub-region was essential. CARICOM was, therefore, quite concerned by the reduction of resources to the sub-region at both the programmatic and administrative levels. The United Nations development system should recognize that such actions could jeopardize the modest human development gains that had been made.

The Committee met to conclude its debate on macroeconomic policy questions and begin its consideration of operational activities for development of the United Nations system and South-South cooperation for development.

Before the Committee was the Secretary-General’s report entitled comprehensive statistical analysis of the financing of operational activities for development of the United Nations system for 2007.

The analysis finds that the total value of contributions received by the United Nations system in 2007 for operational activities amounted to $19.1 billion, an 11 percent increase in nominal terms, and a 2.4 percent real term increase over 2006 contributions. System expenditures, meanwhile, amounted to $17.3 billion in 2007, according to the report.