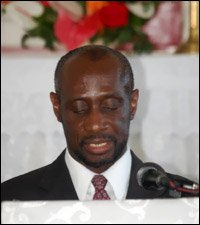 An All-Party Parliamentary Constitutional and Electoral Review Committee of the St. Kitts and Nevis National Assembly has been established.

Leader of Government Business in the lawmaking body, Deputy Prime Minister and Minister of Foreign Affairs, National Security, Immigration and Labour, Hon. Sam Condor, M.P. (Labour ““ St. Christopher 3) made the disclosure on the adjournment of the recent debate on the 2010 Budget.

Since the disclosure, Speaker of the National assembly, Hon. Curtis Martin has written to six members inviting them to serve on the Standing Committee.

Mr. Condor said issues such as devolution for Nevis and matters of an electoral nature need to be addressed constitutionally.

“We are going to set up an All-Party Committee again to look at the matter of electoral reform and constitutional reform,” said Condor.

The appointment comes three weeks after the opening of a new sesion of the St. Kitts and Nevis National Assembly following the January 25th 2010 General Elections which saw the return to government of the St. Kitts-Nevis Labour Party for as unprecedented fourth consecutive term.